we are even stronger.

FFG Canada Ltd. is a Canadian company formed in February 2012 as a joint venture under Canadian law by FFG and Industrial Rubber Company Ltd. (IRC). Both companies each hold a 50% interest, with FFG having full operational control.

Located in the Canadian province of New Brunswick on the Atlantic Ocean, the company is about 5 minutes west of the coastal town of Bathurst on Route 430, in close proximity to the IRC.

The staff consists without exception of locally based Canadian specialists who were initially trained for the AEV project at FFG in Flensburg, Germany and later accompanied by FFG experts on site in Bathurst if required.

To complete its tasks, FFG Canada has all the necessary knowledge, technical capabilities and essential certifications of a modern industrial production facility for highly complex specialised military vehicles. For this purpose, the acquired company premises were equipped with modern production halls and manufacturing equipment as well as various test facilities in the outdoor area. The property is 100% owned by FFG Canada.

The 16,500 m2 fully fenced company premises are video-monitored and alarm-secured. It offers two large production and assembly halls with heavy-duty floors, as well as two warehouses and an office building. In addition, the company has its own welding shop for all welding work, including the welding of armoured steel, as well as a modern paint shop in which complete vehicles can be painted. Powerful gantry cranes in all halls and the welding and paint shop allow the positioning of the heaviest components. All buildings are naturally illuminated and heated, so that work can be carried out all year round without restrictions.

The logistical connections of FFG Canada are excellent. The company site is located directly on Highway 11 as a regional north-south connection along the Canadian Atlantic coast and is about 2.5 hours by car from the provincial capital Fredericton with the major base CFB Gagetown. The nearest major industrial centres in Miramichi and Moncton are less than 2 hours away. The city of Bathurst itself has a regional airport with several daily connections to and from Montreal. For goods traffic and container handling, the deep sea port in Halifax is about 6 hours away by car.

For more than 25 years, FFG Umwelttechnik has been developing, producing and selling innovative, technologically sophisticated bodies for suction and flushing vehicles.

The needs of the customers are just as important as the ability to act flexibly on the market. For this reason, the environmental technology division was separated from the group of companies of FFG Flensburger Fahrzeugbau Gesellschaft mbH in 2017 and has since operated successfully under the name FFG Umwelttechnik GmbH & Co. KG.

Jungenthal Wehrtechnik GmbH, located in Kirchen / Sieg, has been a subsidiary of FFG since 2007. Emerged from the already 1885 founded Arn. Jung Lokomotivfabrik, Jungenthal Wehrtechnik GmbH has developed into a leading European company in the field of construction of hulls and mining equipment for armoured vehicles. Since the foundation of the Bundeswehr, Jungenthal Wehrtechnik GmbH has been and is involved in almost all important defence projects in Germany in the vehicle sector as an important supplier. Today, the production spectrum is wide-ranging and, in addition to new production, also includes the repair of assemblies for recovery equipment, braking systems, tanks and drives.

Rexxon develops and manufactures air conditioning systems in compact or split design for rail vehicles and military applications. In addition, control and regulation systems for automotive applications as well as products for power generation (APU) and power distribution are manufactured. Further core competencies include electro technical vehicle equipment and development services in the field of electronics and software in general.

GEKE Schutztechnik GmbH, based in Lichtenau, is one of the world's leading companies in the field of design, development and manufacture of protection technologies. Since 2008, GEKE has been supplying all-round protection for military applications in the marine and land systems sector. Whether roof protection, side protection against HL, KE or IED threats, splinter protection in the interior or mine protection: GEKE protection solutions have been introduced and field tested worldwide. 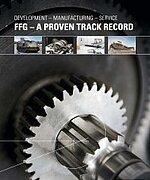